We have carried out a few Jehovah’s Witness funeral services over the years. The faith’s belief that a funeral should be a humble affair rather than an opportunity to display affluence resonates very much with the simple cremation service we provide.

As mentioned on other areas of our site, we don’t have lavish hearses and extravagant coffins. Our funeral services are simple and modest yet at the same time meaningful to those attending.

That said, we cannot facilitate all Jehovah’s Witness funerals as we only provide cremation not burial. We also do not offer the option of an open casket if this was to be a requirement.

Some people are under the impression that Jehovah’s Witnesses don’t get cremated, but that’s not the case. The relatives of the person that has died are expected to carry out the wishes of the deceased with regard to the type of funeral they have.

Cremation is acceptable to Jehovah’s Witnesses because of the belief that Jehovah has the ability to restore anyone whether they were cremated or buried. The Bible does not state what should be done with the body after death.

What Happens at a Jehova’s Witness Funeral?

It’s very similar to most of the funerals we perform. The main difference being that the life events of the deceased and family stories play a lesser role.

At almost all of our funerals Leanne takes the role of celebrant, however this is not the case for Jehovah’s Witness funerals.

Instead, a congregation elder takes the ceremony. A congregation elder is a man who is responsible for, amongst other duties, conducting meetings and directing public preaching activities. Teachings about death and hope of resurrection are read from the Bible.

Our role is to care for the deceased and transport them to the chapel on the day of cremation. Typically we will wait outside the chapel whilst the service is in progress.

The service comprises bible teachings with particular focus on how a life should be lived, death and resurrection. It may contain a hymns related to the readings.

The service may also refer to the deceased, citing examples of actions that they performed inline with their faith. A larger proportion of the service may focus on the deceased if they were a particularly good example to others.

A prayer concludes what is often a relatively short ceremony which aims to comfort those attending. A service of up to half an hour is typical for the funerals we provide – similar to a Jehovah’s Witness funeral.

Attending as a Non-Witness

If you are not a Jehovah’s Witness but wish to attend the funeral this is fine, they are regarded as open to the public. If you’ve been to other funerals you’ll no doubt see many similarities.

What do you wear to a Jehovah’s Witness funeral?

Attendees are smartly dressed with men wearing suit and tie and women being dressed modestly. Muted colours rather than bright vivid colours are best. If you are unsure or feeling nervous you really don’t need to be. In our experience people are always friendly and accommodating.

You’ll notice that modesty is apparent during proceedings. The focus is not on the life events of the deceased and there will not be a celebration of life.

At the end of the ceremony attendees will leave and the deceased will be cremated in the same way as anyone else. If flowers were brought to the service these can either go with the deceased or remain behind. Again, flowers are acceptable, but modest arrangements free of symbolism are best.

Many funeral services take place in the Kingdom Hall which is the place of worship and meeting for religious services. Some people prefer that the coffin is not present for the ceremony, in this case we can provide a direct cremation and return the ashes or scatter as preferred. 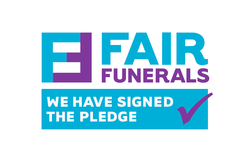